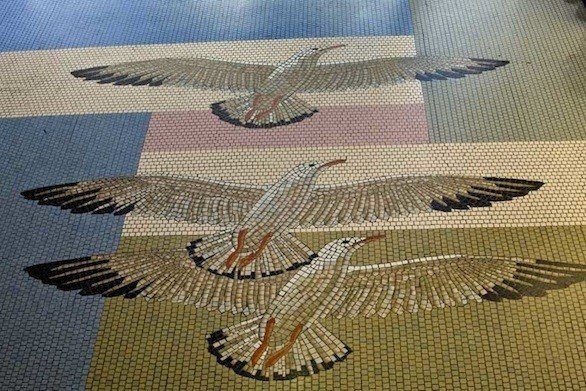 “What’s the gift in this?” I thought, as I sat there. My flight had been delayed, then outright cancelled. Three hours in Long Beach Airport.

Then I heard a chirp. Chirp, chirp chirp.

I looked down, and saw a sparrow grabbing a stick in its beak. It flew halfway up to the ceiling, then all the way up, to a pipe. Then down, down, down came the stick. Another sparrow came down, and went up again with the stick.

No, I realized. They’re trying to build a nest. “Trying” is the operative term. Stick up, stick down. They must have flown up ten times. The pipes were just spread too far apart.

Checking on my flight, I saw a little sign on the desk: “Don’t feed the birds. This is not their natural habitat.” I thought, it’s true, it’s not their natural habitat. But is it mine? Is it natural to sit in an airport building, and fly from city to city, eating peanuts and drinking bubbly water? Maybe they’ve chosen this place specifically. Maybe it’s the safest, most free place they could choose, with access to the salad bar? Maybe the free wifi helps them communicate. Who am I to know?

I didn’t feed them, but I did set down a piece of paper, a receipt wound tightly, there next to my chair. (So much for my new expense app.) In five seconds the little sparrow came and picked it up and struggled to lift it up, halfway, then all the way.

To no avail. The receipt was heavier than the straw cover. Down, down, down came the paper. They tried and tried, like ancient Sisyphus, forced to push the rock up the hill in the land of Hades, only to have it fall down again before it got to the top.

I don’t know how it turned out; they’re probably still trying right now. And now, back home, I’m left wondering, did they succeed? Did they find the right pieces to bring their vision to life? Was this an act of initiation for them, a right of passage, or pure folly?

And what of you, dear reader, and the visions you are building in the world, not stick by stick, but story by story? Do you not piece them together, day after day, only to have weeks – months even – where the progress fall slowly back to earth? The sun rises and the sun sets, the bird climbs like Sisyphus, and the stick falls. You build the nest of the nest, and the next of the next, and there are those days in which it all seems to crack, and threaten to crumble.

But it’s not really crumbling. A nest, after all, isn’t made of one stick, and a vision isn’t just built of one story. It’s made of many: two sticks up and one stick back down. Many stories, told day by day, offering direction and guidance, inspiration and rest. The shift may be subtle; it may require a different lift, or a different landing. And the need may be obvious; you may find yourself yelling out, “This is the wrong place to build a nest!”

Regardless, building your vision means going up, and down, and up and down again, like the people coming and going in an airport, or the birds making their life there.