For more than 30 years, Enterprise Community Partners has touched millions of lives by creating hundreds of thousands of homes – and investing billions of dollars – in communities nationwide.

Because of the breadth and depth of Enterprise’s work as a collection of for-profit and non-profit organizations, the Enterprise Marketing & Communications team sought to develop a clear, concise story of who Enterprise is and what it does.

First, we did a 360 degree intake, interviewing key leadership, partners and communicators on the team. We read all relevant documents, books, and viewed media that was relevant to the story. Along the way, we iterated key concepts and developed a core story and messaging that would create one dynamic central narrative that could be shared across many platforms.

We reshaped their origin story to clearly anchor its rich organizational roots, communicated its success, and illuminated its vision. In addition, we coached their leadership and used the story to train team members on telling the story in their own way from their own angle in the organization. We worked with the Marketing & Communications team to develop core messaging, design elements and a video to communicate the story to internal and external audiences. 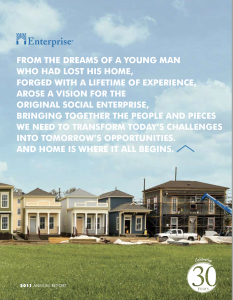 • The core story has enabled Enterprise to connect its many parts to one central story and give life to it’s mission, vision and values.
• The story became became central to their website, was read by their CEO in an all-hands meeting as well as in a movie by Edward Norton, the grandson of the founder.
• Messaging drawn from the core story has appeared in various materials, including speeches in front of Congress, advertisements, animations, congressional testimony, the annual report, executive blog posts, and the organization’s strategic plan.

← Storytelling for RecruitersMatching Story With Meaning →
SUBSCRIBE FOR UPDATES